Political party conventions are not known for being memorable, except of course when they are. '68 ring a bell? For four days in September of 2008 the Republicans took over the sleepy city of Saint Paul and it became, in a very real sense, a battleground. Smoke bombs, percussion grenades, pepper spray and journalist arrests bid for attention with Policy, Palin and McCain.

It was a convention unlike any other: The party of the least popular sitting president since Hoover, a hurricane, and a lot of protesters. Another new addition: an army of independent journalists to cover it.

Unconvention is a film about all of this, told through the eyes of the media. Ultra-Conservative, Ultra-Liberal and everything in between; this is an abstract portrait of a very concrete process, remixed into a new linear whole.

The film uses a collective process to tell a collective story, using found footage from dozens of journalists, citizen journalists and just plain citizens. A mash-up of modern media, from HD to cell phone cameras telling the lost story of police, protestors and civil liberties.

A bit like the film Ace in the Hole about a small news event, that quickly becomes a circus, and becomes a story about the people reporting the news rather then the news itself. For a few brief days, and several millions of dollars, the sleepy metropolis of St. Paul gets transformed into cyber age Tokyo with video screens, art installations, and a variety of other shenanigans; protesters, supporters and miscellaneous circus folk from both sides of the isle.

The film is as much about media as it is the convention itself, using work from a number of sources cut together in seamless remix. Pieces from major news organizations blend with citizen journalists, protesters, reporters, and plain old citizens. Made in an 8 week period, this is a pop abstract expressionist unbiased view of very biased process." 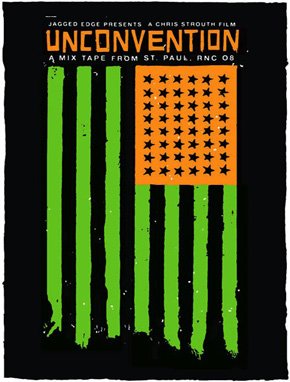 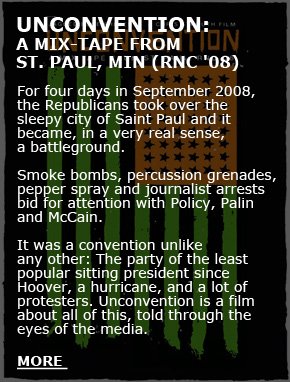